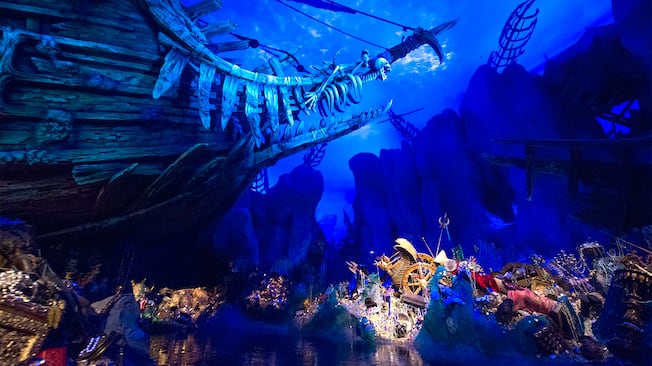 Cruise Treasure Cove with the most charismatic rogue ever to rock the Jolly Roger—the devilishly dashing Captain Jack!

Set sail for seafaring fun that takes you on, over and under the deep blue in search of Davy Jones’ sunken plunder—all while crossing paths with pirates, mermaids and even the savage Kraken.

Landlubbers leave from the Royal Navy’s former fortress and embark on a course that passes through the mysterious Voodoo Alley and Jack’s own secret sanctuary—the Caves of Misfortune—before hitting the briny depths. From a face-to-face with some of the world’s saltiest sea dogs to dreaming of those coveted doubloons, you’ll surely “shiver ye timbers” during this rollicking romp!

Yo ho, yo ho—batten down the hatches for a one-of-a-kind ride with your favorite Pirates of the Caribbean! Board a ship christened after some of history’s most scandalous scoundrels and watch their notorious tales come to life.

Your Treasure Quest Begins
Weigh anchor and hoist the mizzen! Your journey commences as you wind through the fort’s 17th-century supply room, an illuminated map cabin and the abandoned jail cells Captain Jack now calls home. Have ye got what it takes?

Upon shoving off from the dock, your boat floats past Barbossa’s Bounty and meanders into murky waters. You arrive at the entrance to a series of eerily dark caverns. Dare to continue, matey?

Into the Caves
Light flickers and fades while gliding deeper inside the caves until suddenly you’re surrounded by pirates—but dead men tell no tales! Will the old bones of these scurvy rapscallions rattle ye?

Captain Jack
You spiral ‘round a corner as lightning strikes, revealing a skeleton that magically comes alive—it’s Captain Jack! Once the Captain gives his orders, heave ho, heave ho… it’s off to treasure hunt ye go.

To the Depths
Swallowed by the ocean, you plummet to the Graveyard of Lost Ships, where gold glimmers from wrecked hulls. Without warning, the monstrous Kraken awakens as you enter what’s left of Davy Jones’ massive craft.

Undersea World
While making your way into mermaid territory, a bevy of fish-tailed beauties harmonize as their crusty counterparts glare at passing ships. Jones’ former crew members fiercely stand guard over his glistening trove—one hammerhead sailor snarls “The Captain be wantin’ a word with ye!”

Davy Jones
Barnacle-encrusted spears, melancholy organ music and walls embedded with the bodily remains of a sordid few… you’ve reached the lair of that squid-headed horror himself, Davy Jones.

To Battle
All hands on deck! Swords are drawn and cannons blast as the captains wage war over the biggest booty in the Caribbean. You’re caught in the crossfire, with fighting pirates battling to their doom.

Inside the Hold
Trapped in the ship’s hull, water gushes all around your swirling boat. Captain Jack piles jewels and gold into the hold as Davy Jones jumps in. A dastardly duel ensues—will Captain Jack escape all the richer?

Fool’s Gold
After surviving Davy’s grip, your voyage returns to Fort Snobbish, now filled to the gills with Jack’s precious treasure—but Jones isn’t done just yet! Will the wicked scallywag’s curse rob Jack of his good fortune? Take ye sea legs for a test run to find out!

From Films to Full-Blown Attraction

After nearly a decade-long collaboration of legendary Disney artists, animators, writers and Imagineers, the very first Pirates of the Caribbean attraction officially opened in Disneyland Park in California on April 19, 1967—only 9 months after Walt attended the dedication ceremony of New Orleans Square. Sadly, he never saw its completion.

What became a crowning achievement in Disney theme park history paved the way for an adaptation at Magic Kingdom park in Walt Disney World Resort, Florida. Additional versions can be found at Tokyo Disney Resort and Disneyland Paris.

Decades later, the popularity of the attraction inspired a hit film series starring Johnny Depp as that ever-charming ne’er-do-well, Captain Jack. Thanks to the films, the stories of these boisterous marauders live on through legions of fans around the globe.

And now, life once again imitates art as Shanghai Disneyland premieres Pirates of the Caribbean Battle for the Sunken Treasure, an all-new take on the classic attraction—inspired by the films!

Drop plank at a restaurant run by the Captain himself! This grog shop offers BBQ, seafood and vegetarian fare—with pirate-y fun far as ye eye can see!

Check Wait Times in the Theme Park with Our Official Mobile App!