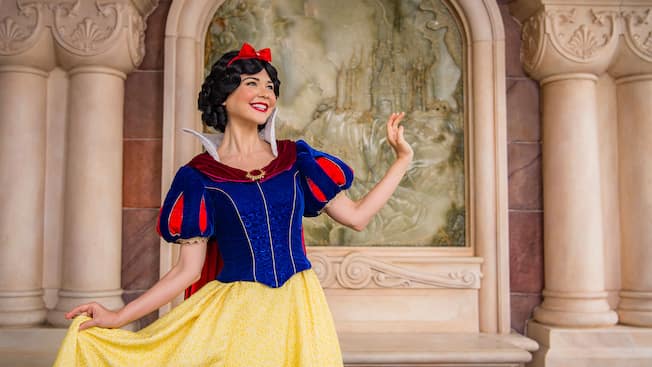 Disney Royalty elegantly welcome one and all into a “happily ever after” filled with family, friends and fun—and that includes you!

(Selfie Spots with Disney Characters are currently in trial operations. Please follow onsite Cast Members’ instructions during this experience. To provide a safe and enjoyable experience for all guests, the use of selfie sticks is not allowed in Shanghai Disneyland.)

*Characters appear occasionally throughout the day.

Enter the castle at Storybook Court—and you might receive a royal greeting you’ll never forget!

Just inside the castle walls, several beloved Disney Princesses appear from time to time—including Cinderella, Rapunzel, Belle and Snow White. If you encounter a Disney Princess, pose for a picture with her… and show your friends and family who you were hobnobbing with at Shanghai Disneyland!

At Enchanted Storybook Castle, you might encounter Cinderella, Rapunzel, Belle, Aurora or Snow White. Along with the other Disney Princesses, they symbolize innocence and beauty—displaying love, hope, courage and kindness. From their first appearance to the present, they have created an endearing legacy.

The first Disney Princess was Snow White, introduced in the animated Disney film Snow White and the Seven Dwarfs in 1937. Since then, there have been a number of classic Disney films introducing additional Disney Princesses, including Cinderella, Sleeping Beauty, The Little Mermaid, Beauty and the Beast, Aladdin, Pocahontas, Mulan, The Princess and the Frog, Tangled, Frozen and the Disney•Pixar film Brave.

Remember all the Disney Princesses who have found a place in people’s hearts for generations around the globe:

Snow White
The young princess, Snow White, is considered the fairest in the land. When she had to flee her step-mother, The Queen, Snow White was helped by the seven dwarves. They let her stay in their cottage and she cooked and cleaned for them. Snow White ate an apple that placed her under a sleeping spell. She was later awakened by a handsome prince.

Cinderella
Even though her step-sisters and step-mother were unkind to her, Cinderella never gave up on her dreams. Cinderella wished to go to the royal ball and her Fairy Godmother made her wish come true. At the ball, Cinderella met and fell in love with Prince Charming. Now, they live happily ever after.

Aurora
Princess Aurora believes that dreams do come true, and true love conquers all. When she was born, Princess Aurora was placed under Maleficent’s spell which caused her to prick her finger on the spindle of a spinning wheel and fall asleep. She could only be awakened by true love’s kiss. Aurora was awakened from the spell by her “dream prince”, Prince Phillip.

Ariel
An independent, determined mermaid who sings, daydreams and is willing to risk everything for her true love.

Belle
Belle is a beautiful, intelligent, and independent young woman who loves to read. When her father was held prisoner in the Beast’s castle, she offered to take his place. Belle is friends with all the enchanted objects in the Beast’s castle. With kindness and compassion, she falls in love with the Beast and helps break the spell he is under.

Jasmine
A free-spirited, kind and confident dreamer whose dreams of adventure come true through Aladdin.

Pocahontas
A beautiful Native American with a respect for nature falls in love with an Englishman and works to bring peace to her people.

Mulan
A brave girl who disguises herself as a man to go off and fight for her country.

Tiana
A young woman with ambitions of owning a restaurant who takes an adventure and finds true friends and true love.

Rapunzel
Rapunzel is an intelligent, adventurous princess who is excited to see life outside her tower. Growing up, Rapunzel wanted nothing more than to see the floating lights. Flynn Rider brought her back to the kingdom where she discovered she was the lost princess. Rapunzel has many hobbies. She especially loves painting.

Merida
A red-haired princess by birth and an adventurer and explorer in spirit who longs to control her own destiny.

Elsa and Anna
Both are dutiful daughters and loving sisters—with Anna getting help from an ice harvester, a reindeer and snowman to save their country Arendelle from the eternal winter Elsa is magically creating.

Find the Next Available Showtimes with Our Official Mobile App!

Download the Shanghai Disney Resort mobile app before your visit for upcoming showtimes, age recommendations, map locations and much more.